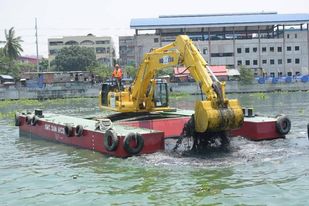 San Miguel Corporation (SMC) has reached its goal of removing over 1 million metric tons of silt and solid waste from the length of the Tullahan River ahead of the schedule drawn up with the Department of Environment and Natural Resources (DENR).

As of June 20, SMC’s cleanup teams have rid the river of an accumulated total of 1,029,257 metric tons of silt and waste, roughly equivalent to close to 70,000 dump trucks.

Having met its target, SMC’s team will soon be moving on to its next mission: to clean up rivers belonging to the Marilao-Meycauayan-Obando River System (MMORS) in Bulacan.

“We thank the DENR for its trust and confidence in our ability to get the job done. Despite the pandemic that delayed and limited our cleanup operations, we were determined to accomplish our objectives, which included removing silt and waste, increasing the river’s width and depth in shallow sections, improving navigability, and helping restore marine line,” SMC president and CEO Ramon S. Ang said.

“What is critical now is getting all stakeholders to keep the river clean and free of garbage. This requires all of us working together. We can either go big or take small steps and build on our own individual efforts to manage our consumption and waste generation. What’s important is we start now,” Ang added.

SMC started the P1-billion Tullahan program together with the DENR in February 2020, to complement the ongoing Manila Bay rehabilitation project. Work, however, was interrupted by the pandemic and only began in June, after the easing of pandemic restrictions.

SMC was one of the companies that answered the DENR’s call to the private sector to clean tributaries leading to the Manila Bay, as these were identified as major sources of solid waste, including plastics.

The company is undertaking the project at no cost to the government or taxpayers, and is part of its larger sustainability initiative to clean up major river systems and coastal areas throughout Luzon–to help mitigate some of the impacts of climate change, in particular, flooding.

Hydrographic or depth surveys conducted before and after dredging showed that sections of the river that used to only measure one to three meters in depth, are now more than three to five meters deep.

The increased depth improves river flow and capacity to carry floodwaters out to the Manila Bay. In the last two years, areas around the river have reported lesser incidences of severe flooding. Whenever there was any flooding, waters were observed to subside faster than usual.

Following the dredging plan laid out by the Department of Public Works and Highways (DPWH), SMC’s river cleanup operations covered an 11-kilometer stretch from the Manila Bay in Navotas to NLEX in Caloocan City.

Since the project’s start, SMC has continued to accelerate the pace of the cleanup by investing in more equipment and hiring more personnel.

Dredged wastes are sorted and transported to DENR-accredited and assigned disposal sites.

Meanwhile, work to clean the MMORS in Bulacan is set to start this month. The initiative will be part of its comprehensive flood mitigation measures for the province of Bulacan, which it committed together with its New Manila International Airport (NMIA) and Airport City projects.

A study commissioned by San Miguel Aerocity Inc., has assessed the impact of the airport development on flooding, and has identified measures to reduce the province’s long-standing flooding problems. It also studied the water flow affecting the airport site and areas within a seven-kilometer radius.

“This study, plus our experience and learnings in the past two years in the Tullahan River, as well as our ongoing clean-up of the Pasig River, will be a huge help to our upcoming river rehabilitation effort in Bulacan,” Ang said.

SMC’s river channel improvement plan for Bulacan involves the clean-up, widening, and deepening of the Alipit or Taliptip River, Sta. Maria River, and the Meycauayan River.

Meycauayan River is one of seven Philippine rivers included in the world’s top 10 list of tributaries that emit the highest share of ocean plastics, according to scientific publication Our World in Data, a collaborative effort between researchers at the University of Oxford and UK-based non-profit, Global Change Data Lab.

SMC said the river rehabilitation plan will improve these rivers’ capacity to carry excess rainwater following the removal of silt, trash, and other obstructions that restrict the free flow of water, and threaten marine ecosystem and traditional fishing grounds.